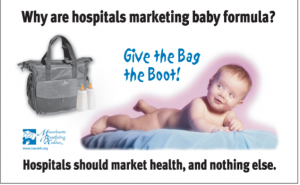 March 20, 2020-  Formula marketing never takes a holiday, it simply moves to greener pastures, as more hospitals have banned the bags (1,316 or 40% of hospital by Ban the Bags’ last count). END_OF_DOCUMENT_TOKEN_TO_BE_REPLACED

Boston — As of July 1, 2012, all 49 Massachusetts maternity facilities have voluntarily eliminated the formula company diaper bags, traditionally given to new moms at hospital discharge. Massachusetts became the nation’s second “bag-free” state after Rhode Island’s seven hospitals eliminated the bags in 2011. The achievement will be celebrated on July 18, at 10:30 am at Nurse’s Hall at the State House, in an event that includes Dr. Lauren Smith, medical director of the Massachusetts Department of Public Health.

In 2005, nearly all maternity facilities in the state were giving out discharge bags from formula companies. The marketing technique is particularly effective in lowering breastfeeding rates in part because of the implied endorsement of the hospital and health professionals. The bags often come with a requirement that hospitals get their formula for free, which contributes greatly to unnecessary use of formula by breastfeeding mothers. Research has consistently shown that such use is one of the strongest predictors of early breastfeeding failure— with a resultant increase in formula sales.
END_OF_DOCUMENT_TOKEN_TO_BE_REPLACED

Providence, Rhode Island — As part of efforts to support breastfeeding mothers, women who give birth in Rhode Island will no longer receive infant formula marketing packs when they head home from the hospital. Rhode Island’s First Lady, Stephanie Chafee, Lieutenant Governor, Elizabeth Roberts, RI Department of Health Director, Michael Fine, and Marsha Walker from the Massachusetts Breastfeeding Coalition’s Ban the Bags campaign joined the Rhode Island Health Department Monday November 28, 2011 in celebrating the state’s becoming the first in the nation to eliminate the distribution of infant formula marketing bags in all of Rhode Island’s birthing hospitals.

Director Fine, the Lt. Governor as well as the First Lady spoke of their commitment to breastfeeding families and their support of the hospitals’ efforts in this giant step forward in removing the commercial barriers to breastfeeding. State health officials noted that studies link giveaways to decreased breastfeeding rates, which is not in keeping with their efforts to promote optimal health for mothers and infants in Rhode Island.

Show your support for Ban the Bags with mugs, badges, t-shirts, and even a Ban the Bags Bag. Visit our online store. Proceeds support the Ban the Bags campaign.

Our ad focuses on formula marketing as a consumer issue, and part of a bigger pattern of unethical marketing techniques from the pharmaceutical industry. In this sense, we can show our leaders that this practice affects all citizens, and is not just an issue about breastfeeding.

Our WIC reference shows over a $700 price difference between formulas marketed by hospitals, and store brands. A conservative estimate shows the name brands cost 66% more. Other sources show an even greater difference in price. The Sam’s Club website shows $.82 per ounce of name-brand powder (in bulk) compared to $.32 for their own brand? more than twice as much.

Research shows brand loyalty runs high with consumers of baby formula. Parents are often hesitant to switch to a different brand if they know their baby is tolerating the expensive brand they started in the hospital.

March 20, 2020- With slumping infant formula sales has come the industry shift in marketing to toddler or follow-on milks for babies starting as young as 9 months.

END_OF_DOCUMENT_TOKEN_TO_BE_REPLACED

March 20, 2020- Synthetic human milk oligosaccharides (HMOs) are being added to formula and driving up prices? But are they effective and worth the extra price?

END_OF_DOCUMENT_TOKEN_TO_BE_REPLACED

All birthing facilities in West Virginia have now eliminated formula company discharge bags, as as confirmed by Ban the Bags. END_OF_DOCUMENT_TOKEN_TO_BE_REPLACED

The Food and Drug Administration (FDA) is finally taking some major steps to tighten scrutiny of the labeling (and accompanying advertising) messages that the infant formula industry has been using to market their products in the US.  END_OF_DOCUMENT_TOKEN_TO_BE_REPLACED

According to a report, the UK government has introduced regulations that would make a company’s failure to fall in line with EU infant formula and baby food marketing laws a criminal offense subject to fines. END_OF_DOCUMENT_TOKEN_TO_BE_REPLACED

The United States is one of a minority of countries with no legal provisions in place to protect the WHO Code of Marketing of Breast-Milk Substitutes, according to 2016 report released by The World Health Organization, UNICEF, and International Baby Food Action Network (IBFAN). Global sales of product now are $44.8 billion US dollars, on track to nearly double (to $70.6 billion) by 2019.

END_OF_DOCUMENT_TOKEN_TO_BE_REPLACED

Delegates to the Royal College of Paediatrics and Child Health, Britain’s national pediatrician’s organization, passed a non-binding resolution urging the College to “decline any commercial transactions or any other kind of funding or support” from all companies that market breast milk substitutes. END_OF_DOCUMENT_TOKEN_TO_BE_REPLACED